Archbishop Giovanni Becciu is currently the Substitute for General Affairs of the Vatican Secretariat of State and the Pope’s special delegate to the Sovereign Order of Malta.
By Robin Gomes
Pope Francis on Saturday appointed a new man to head the Vatican’s office that is charged with the process of beatification and canonization of candidates to sainthood.
The Pope appointed 69-year old Italian Archbishop Giovanni Angelo Becciu as the new Prefect of the Congregation for the Causes  of Saints.  He will assume his post at the end of August.
In the meantime, he will continue as Substitute for General Affairs of the Secretariat of State until June 29, and as special delegate to the Sovereign Order of Malta, popularly known as the Knights of Malta.
Archbishop Becciu who is among the 14 new cardinals that Pope Francis will create on June 29,  succeeds 79-year old Italian Cardinal Angelo Amato who is well past the retirement age of 75.  Cardinal Amato has been heading the Congregation since 2008. 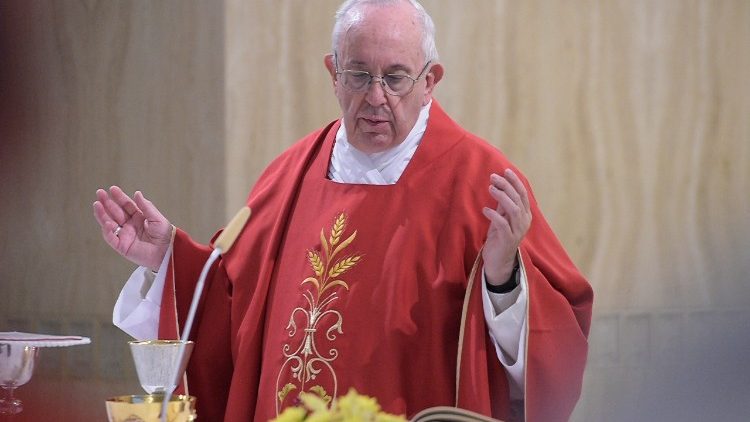 Pope Francis at Mass: the Devil is behind every persecution

During his homily at Mass on Friday, Pope Francis reflected on how the Devil is the cause of all forms of persecution: from cultural colonization to war, hunger, and slavery.

Today, said Pope Francis, we are not only witnessing the persecution of Christians, but of every man and woman, "through cultural colonization, war, hunger, and slavery". But the Lord gives us the grace to fight back and to restore the image and likeness of God that is within us.

Persecution is part of Christian life

In the first reading, St Peter refers specifically to how the persecution of Christians "broke out…like fire". Pope Francis explained how such persecution is "part of Christian life"…

“Persecution is rather like the ‘air’ that Christians breathe even today. Because even today there are many martyrs, many people who are persecuted for their love of Christ. There are many countries where Christians have no rights. If you wear a cross, you go to jail. And there are people in jail. There are people condemned to death today simply because they are Christians. The number of people killed is higher than the number of early martyrs. It’s higher! But this doesn’t make news. Television newscasts and newspapers don’t cover these things. Meanwhile Christians are being persecuted”.

Persecution of humanity as the image of God

The Pope went on to say there is another kind of persecution in the world today: the persecution of men and women because they are made in the image and likeness of God.

“The Devil is behind every persecution, both of Christians and all human beings. The Devil tries to destroy the presence of Christ in Christians, and the image of God in men and women. He tried doing this from the very beginning, as we read in the Book of Genesis: he tried to destroy that harmony that the Lord created between man and woman, the harmony that comes from being made in the image and likeness of God. And he succeeded. He managed to do it by using deception, seduction…the weapons he uses. He always does this. But there is a powerful ruthlessness against men and women today: otherwise how to explain this growing wave of destruction towards men and women, and all that is human”.

The Devil as the Father of Persecutions

Pope Francis described hunger as an "injustice" that "destroys men and women because they have nothing to eat", even if there is a lot food available in the world. He went on to speak of human exploitation, of different forms of slavery, and recalled how he recently saw a film shot inside a prison where migrants are locked up and tortured to turn them into slaves. This is still happening, he said, "70 years after the Declaration of Human Rights". The Pope also reflected on cultural colonization. This is exactly what the Devil wants, he said, "to destroy human dignity" – and that is why the Devil is behind all forms of persecution.

“Wars can be considered a kind of instrument to destroy people, made in the image of God. But so are the people who make war, who plan war in order to exercise power over others. There are people who promote the arms industry to destroy humanity, to destroy the image of man and woman, physically morally, and culturally… Even if they are not Christians, the Devil persecutes them because they are the image of God. We must not be ingenuous. In the world today, all humans, and not only Christians are being persecuted, because the Father of all persecutions cannot bare that they are the image and likeness of God. So he attacks and destroys that image. It isn’t easy to understand this. We have to pray a lot if we want to understand it”. …